Ana (Ona Casamiquela) is an annoying, spoilt art student who throws a hissy-fit when her parents refuse to give her another handout and decides to get a job. Seeing a ‘nanny wanted’ note posted to a lamp-post, she decides to apply for the job and goes to the house of an elderly former pianist Diamantina (Luisa Gavasa) for an interview. Diamantina turns out to be a crazy old bat who drugs Ana, ties her to a chair and forces her to act as an unwilling plaything for her psychotic daughter Elisa (Ana Turpin). Can Ana escape? Will her drug dealer boyfriend (Jesús Caba) come to her rescue? And quite how deadly can Elisa’s games get? 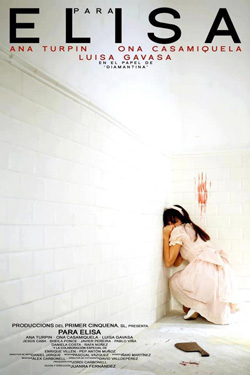 Sometimes I fall into the belief that the Spanish are incapable of making a bad horror film, so it’s nice to be bought back to reality by a film like Para Elisa. It’s not that it’s bad as such – its competently made and gripping enough – but it’s all rather familiar, rather mundane, rather obvious. The recent Italo-American film The Butterfly Room, for example, trod much the same ground by mixing up elements of Misery, Baby Doll and Whatever Happened to Baby Jane?; and it too achieved thoroughly mediocre results.

Directed by Juanra Fernández, this 2013 release is a mercifully short hour and twenty minutes long so at least the time passes quickly enough. As with many contemporary genre films coming out of Spain, it has a certain feel of being an extended episode of Tales of the Unexpected, but it falls far sort in comparison to the likes of The Body, The Hidden Face or The End, largely because it doesn’t offer any ideas that are fresh or new. It’s solid but forgettable, the modern equivalent of the shelf fillers of the video era (gigabyte filler, perhaps?)